Camp Fortune is located in Chelsea Quebec, in the Gatineau Hills north of Gatineau and only 15 minutes from downtown Ottawa. I’ve been running the trails around this hill for many years, but this was the first time I’ve been here for skiing.

My good friend Matt from Barrie Ontario was at Camp Fortune with his family because his son was in the Timber Tour Slopestyle competition in the U12 division, so I took the opportunity to visit with him, explore Camp Fortune and watch some crazy kids flipping, spinning and grinding their way down the mountain.

Camp Fortune has three areas called Meech, Valley and Skyline. I knew from my trail running that Skyline would be the more advanced terrain, so we headed there first to check out the runs.

Canadian and Chute are on skier’s left from the top of the Skyline quad chair. The snow was hard packed groomed, so we had good surface to throw down some turns. It was fast and fun! We did several laps on Skyline, touring Heggtveit and Swan Dive but there is still not enough snow to try out some of the glade runs like Craigsmarc. I’ll need to come back for that!

It was time to head back over to the Valley side to check up on the slopestyle competition. Matt’s son was ranked 2nd in his age category on day one of the competition but he injured his shoulder and would have to withdraw on day two. He was bummed but it’s an occupational hazard and he’ll be ready for the next one.

We were able to watch the kids performing a series of tricks as we rode the Valley quad chair up and then we parked ourselves right next to the jumps to get a closer look. They were fearless as they went from rails to jumps, sometimes taking off or landing ‘switch’ (facing uphill).

A fun, low-key family-oriented competition, they have an official judge’s platform for the serious side (all competitors are scored and collect points for their Freestyle Ontario ranking) and a sound system for music and introducing the athletes before every run. The announcing duties were handled by a couple of the young athletes who were not competing, including Matt’s son, which was quite entertaining.

We continued on with our skiing and explored the runs around the Meech quad chair. These are mostly blue runs but longer than at Skyline, so we had more time to work on carving down the mountain. Of the 27 runs at Camp Fortune, 13 of them are open for night skiing too. This means from Monday to Friday, you can ski 9am to 10pm, Saturday from 8:30 to 10pm and Sunday 8:30 to 4pm. And adult lift tickets are only $46 for a day pass and $35 for a 6-hour night ski! Great deals for sure!!

I’m more familiar with the mountain during the summer and I can attest that they have spectacular trails for running and mountain biking. They also have an elaborate aerial park with zip lines that looks like a lot of fun. And I see now they also maintain some bike trails for fat biking all winter, which is a booming trend we are seeing at a lot of ski hills.

At the end of the day, we grabbed a beer from ‘the Bar’ and walked out to watch the end of the competition with some of the other parents. I can’t help but wonder if I should be learning a new trick, as those kids make it look so easy. Then I remember I’m almost 50 and gravity is not always kind.

Thank you Camp Fortune for the excellent ski day and hosting an awesome slopestyle event! (I promise to come back to sample some of your glade skiing.) 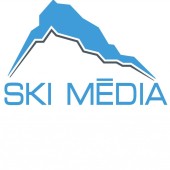